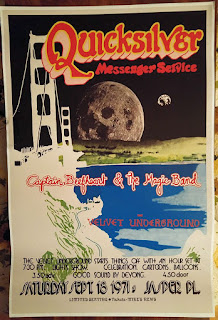 The triple bill consisting of the genial psychedelic-rock of San Francisco's  Quicksilver,  the delta blues by way of Ornette Coleman free-jazz of  Captain Beefheart And The Magic Band,  and the post-Lou Reed  Velvet Underground  at the Edmonton Gardens on September 18, 1971 was maybe the strangest (and most intriguing) bill from that era in the city's music history.

Quicksilver (Messenger Service) had never quite achieved the heights w/ the public as fellow Bay Area residents The Grateful Dead and Jefferson Airplane in the first flush of the Summer Of Love in 1967, though their career was on seemingly solid ground in 1971.

Captain Beefheart and The Magic Band were 2 years removed from their masterwork  Trout Mask Replica  and coming off the almost as good  Lick My Decals Off, Baby, and were 3 months away from releasing The Spotlight Kid, perhaps the most accessible of Don Van Vliet's work.

Originally booked for the Jasper Place Sports Centre, the concert was moved shortly after to Edmonton Gardens due to surging ticket sales. In a small PR twist, despite being (arguably) the least successful commercially of the 3 bands, Captain Beefheart was the focal point of local coverage by both The Journal and Gateway: 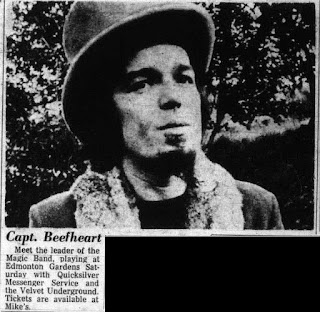 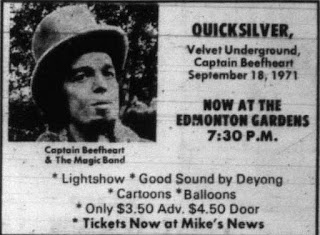 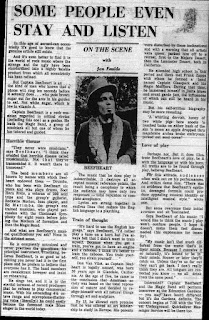 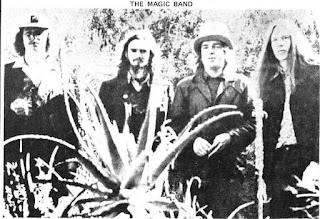 A near capacity crowd of 4500 souls attended the concert on September 18, 1971, with both The Journal and Gateway giving their takes on the proceedings: 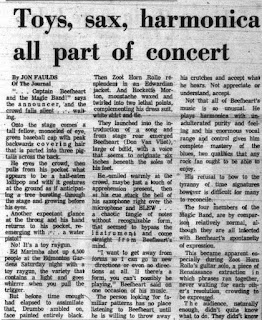 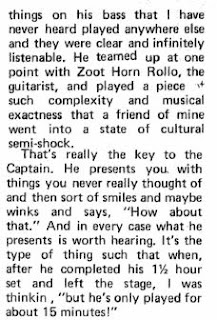 Willie Alexander was gracious enough to email me and give me his recollections of the concert:

"Most of my memory is of Beefheart. His soprano sax  echoing thru (Edmonton Gardens)  & waiting to talk to him after his set to ask if I could borrow his broom to sweep up the beer cans on the moon in a song I was writing ( the broom was in one of his ),  he said it was alright with him but I would have to ask management . I waited till he was thru fielding the press ...." are there gonna be any blues on yr next record?" & he'd say, "why yes & some red & greens too."  I liked being way up north in Edmonton, we flew in from Vancover I think. I was just learning some of the VU songs and they were learning mine. Being from the east coast I really didn't pay much attention to Quicksilver."

Though no tape of the concert seemingly exists (if you have a lead on a copy, email me, please!) some live tapes do exist of all 3 bands in that time.

The Velvet Underground Live from November 5, 1971:

Captain Beefheart And The Magic Band Live in Vancouver on September 17, 1971: 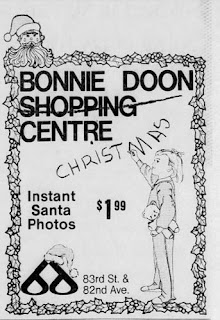 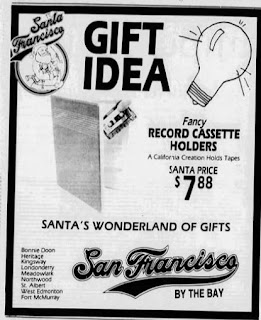 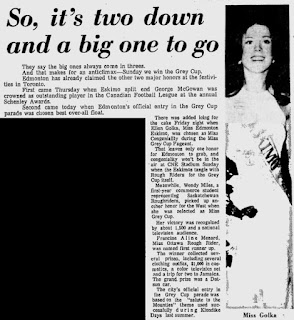 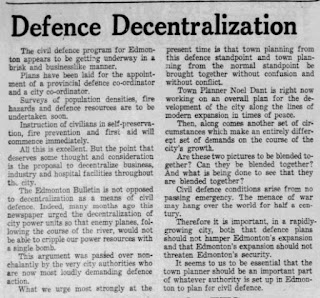 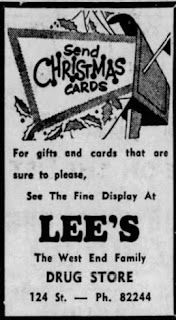